Don't miss Mg if you get migraines 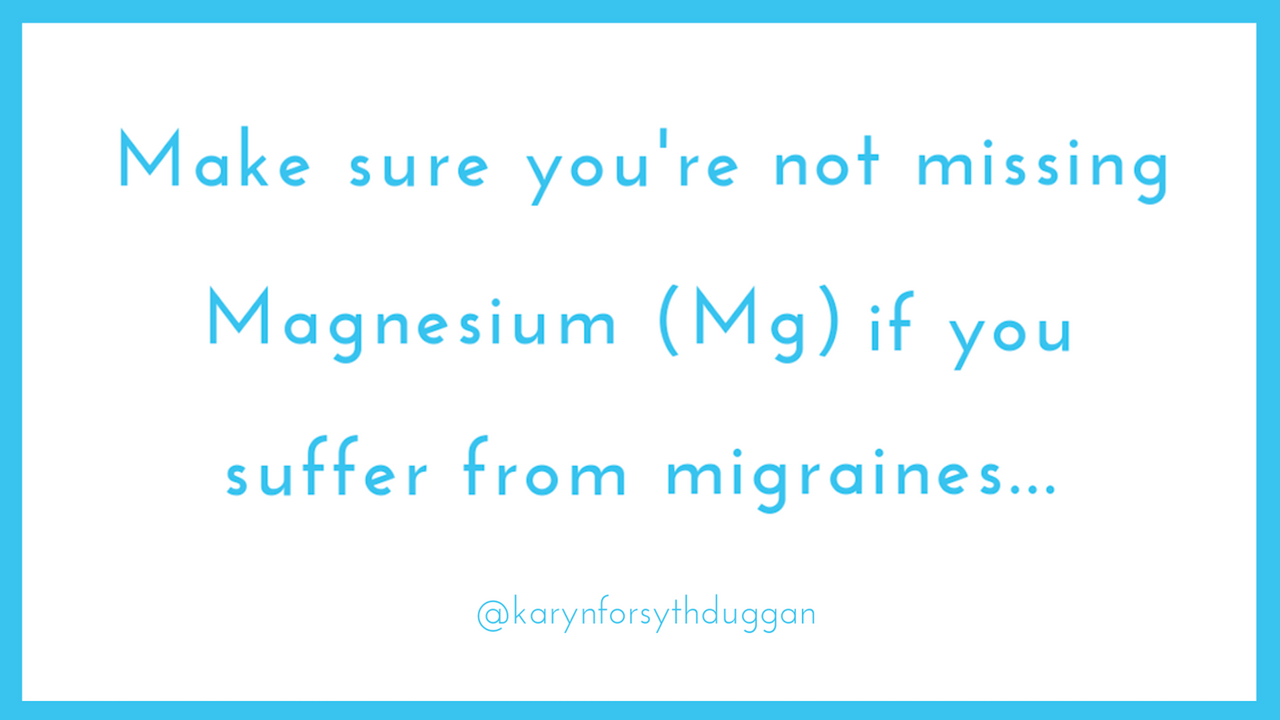 Don’t miss Magnesium if you get migraines…
If you’re one of the 10% of the population worldwide who suffer from migraines, I highly recommend you make sure you’re not deficient in Magnesium (Mg).

How do you know if your headaches are migraines?
The International Headache Society diagnoses a migraine by its pain and number of attacks (at least 5, lasting from 4-72 hours if untreated), and additional symptoms including nausea and/or vomiting, or sensitivity to both light and sound (NIH, n.d.).

Isn’t there a medication for migraines?
There are several, but there’s no absolute cure for migraines.  Medication options include standard anti-inflammatories (NSAIDs, e.g., Excedrin/Advil etc.), Triptans (a newer class of medications), and Anti-emetics (used to treat nausea and vomiting).  One of the most commonly prescribed medications for migraines is Imitrex (a Triptan medication), however, in my practice I commonly hear complaints about this medication - I’ve heard clients say things like “it wipes me out” / “I can’t function on Imitrex...I have to lie down” etc.  As a result, most of my clients prefer not to take it, unless they really have to…

So, prevention is key, and that’s where Mg comes in…

How does Mg help prevent migraines?
Mg is the fourth most abundant mineral in the body, it serves as a cofactor and/or activator in more than 600 enzymes in the body; it’s crucial for multiple processes including for muscle contraction and relaxation, and normal neurological function (Razzaque, 2018).  It also maintains the tone of the blood vessels and prevents over-excitability of nerve cells; low Mg can induce cerebral vasospasm (Pizzorno, Murray & Joiner- Bey, 2016).

In a systematic review Mg was found to be a safe and effective strategy for prevention of migraines (von Luckner & Riederer, 2018).

Low levels of Mg have been associated with migraines, as well as numerous other diseases including Alzheimer’s, insulin resistance, type 2 diabetes, hypertension, cardiovascular disease, and ADHD (Grober, Schmidt & Kisters, 2015).

How likely is a Mg deficiency?
Most cases of Mg deficiency are undiagnosed because serum Mg is still the mostly widely used measure despite the fact that serum Mg does NOT reflect intracellular Mg (i.e., Mg levels inside your cells), which accounts for approximately 99% of total body Mg (DiNicolantonio, O’Keefe & Wilson, 2018).  For more information about more accurate methods of assessing Mg status, consider talking to your doctor about any/all of the following measures.

And, know that increasing numbers of Americans fall below the recommended daily allowance (RDA) for Mg;  dietary intake of Mg in the U.S. are said to have been declining over the last 100 years from about 500 mg/day to 175–225 mg/day.

How much Mg do we need?
We need to consume Mg to avoid deficiency, but the recommended daily allowance (RDA) for Mg varies (Grober, Schmidt & Kisters, 2015).  The Institute of Medicine (IOM) recommends 310–360 mg and 400–420 mg for adult women and men, respectively. Other recommendations in the literature suggest a lower daily minimum intake of 350 mg for men and 280–300 mg magnesium for women (355 mg during pregnancy and lactation).

How much is too much?
Toxicity of Mg is uncommon and will not occur from food intake.  However, it can happen with supplementation.  Diarrhea is a common early sign of excess Mg...which is why Mg is also helpful for anyone suffering from constipation.  Hence you may hear practitioners talk about taking Mg to bowel tolerance, i.e., how much can you take before you cause loose stools?

Are there contraindications with Mg?
Several medications interact with Mg including Bisphosphonates, Antibiotics, Diuretics, PPIs.

As always, it is strongly advised you talk with your PCP before adding any supplement to your daily regimen.