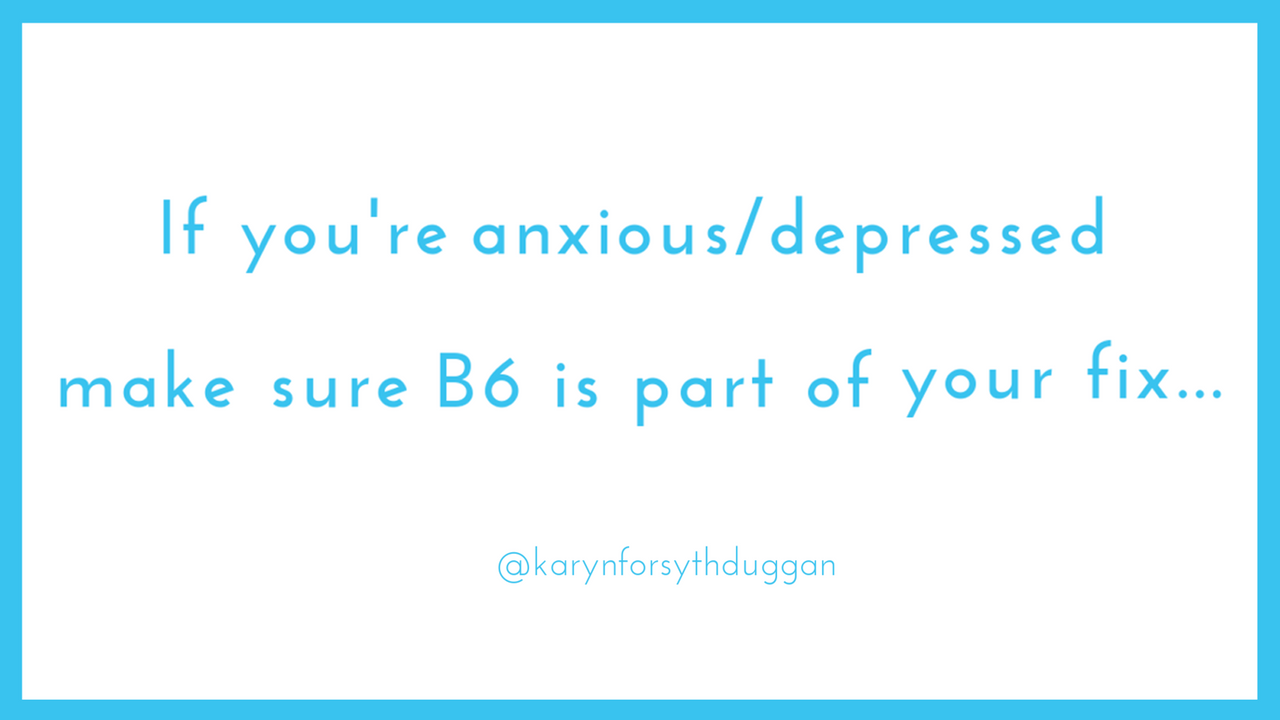 If you’re anxious or depressed, Vitamin B6 should be part of your fix…
As many as 18% of the U.S. adult population suffer from an anxiety disorder, which often appears in tandem with depression (Anxiety & Depression Association of America, 2018).  It’s human nature to look outside ourselves for things to blame, maybe it's our spouse/children/those addictive platforms on our phones etc… It is rarely just one thing, but I encourage my clients to think about the power of their food and lifestyle choices to influence how they feel and function on a daily basis, and I work to identify nutritional deficiencies which may be causing/exacerbating their symptoms.

First, a little bit of about B6…
It’s a water soluble vitamin.  It’s the generic name for no less than 6 compounds.  Pyridoxal 5’ phosphate (PLP) and pyridoxamine 5’ phosphate (PMP) are the most active coenzyme forms; they’re considered the most bioavailable, and therefore the most important physiologically.  It’s vital for red blood cell formation, protein metabolism, cellular growth, nervous and immune system function, maintaining blood sugar, and for cognition via the biosynthesis of neurotransmitters.  Most importantly (for the purpose of this post), B6 is a cofactor in the tryptophan-serotonin pathway (Hvas, Juul, Bech, Nexo, 2004). FYI - serotonin is loosely defined as one of our feel good/happy neurotransmitters.

How do I know if I’m deficient in B6?
Symptoms to watch for include dermatitis with cheilosis (scaling on the lips and cracks at the corners of the mouth), swollen tongue, depression, confusion and weakened immune function.  However, you could have a mild deficiency for years and be completely unaware.

Is the B6 in my multivitamin sufficient to avoid a deficiency?
It could be but it’s worth checking.  Check this Centrum multivitamin (MV) - you’ll see it provides 2mg of B6, but it doesn’t specify the type of B6.  By comparison, look at this pharmaceutical grade MV - it provides 20 mg of B6, in the form of P5P.

Now that you know that Pyridoxal 5’ phosphate (PLP) and pyridoxamine 5’ phosphate (PMP) are the active forms of B6, which form would you be more inclined to consider?

How much B6 do I need?
The recommended dietary allowance (RDA) for B6 is 1.3 mg for anyone between 19-50 years old, but RDAs are based on the average daily level of intake required to meet the nutritional needs of healthy people (NIH, n.d.).  FYI - the daily values are based on the RDA; RDAs are just more specific, i.e., they provide values for males, females, age etc.  The RDAs should be considered a starting point (click here to read more about the RDA estimation process).  The tolerable upper limit for B6 is 100 mg for anyone over 19 years old.

It is important to note that chronic stress is known to deplete B6 (Stough, et al. 2014), so if you’re stressed simply meeting the RDA for B6 isn’t likely to be sufficient.

Cautions & contraindications:
It is always best to take any B vitamin(s) early in the day as they can be stimulatory, and they should always be taken on a full stomach to maximize absorption.

As with any dietary/lifestyle/supplement change(s) they should be reviewed with your primary care practitioner to avoid any potential complications.  The following are contraindications to be aware of: Some antiepileptic drugs including valproic acid (Depakene®, Stavzor®), carbamazepine (Carbatrol®, Epitol®, Tegretol®, and others), and phenytoin (Dilantin®) decrease availability of B6.

Cycloserine (Seromycin) is a broad-spectrum antibiotic (for tuberculosis), can increase excretion of B6.