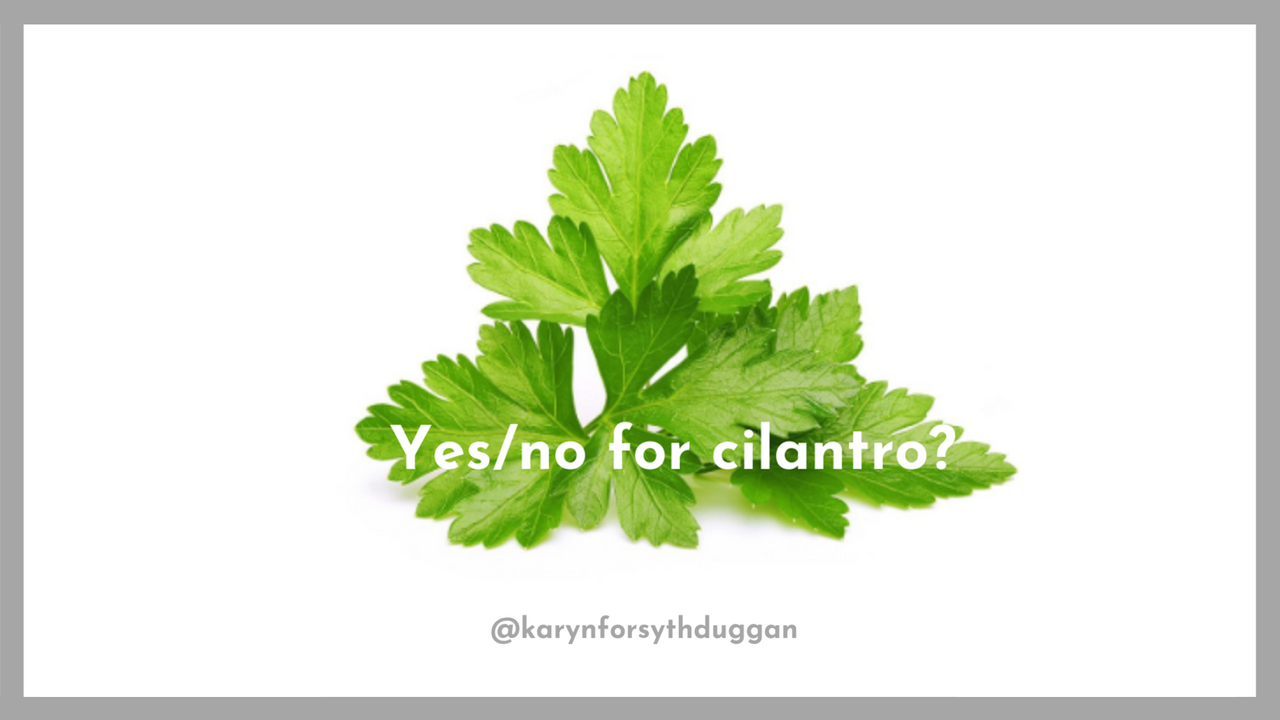 For some people cilantro actually tastes like soap; Julia Child is said to have found cilantro revolting!!

According to Petruzzello (n.d.) there’s a genetic explanation for the existence of ‘cilantro haters’ - they’re said to have a variation in a group of olfactory-receptor genes which facilitates the strong perception of the soapy-flavored aldehydes in cilantro leaves.  Interestingly, there’s said to be less incidence of this genetic trait in Central America and India which may explain its proliferation in those regions.

If you're like me and you love the taste of coriandrum sativum (C. Sativum), the botanical name for what we commonly refer to as coriander & cilantro, it's worth reading about it's benefits...

Before doing a little research, I admit I thought it was a little like the zucchini and courgette situation...i.e., the same thing but different nomenclature in different parts of the world...in Ireland (& in most of the UK) when you're buying cilantro you have to ask for coriander, but in America if you ask for coriander you'll be guided to the spice aisle, and if you ask for cilantro they'll bring you to the produce section.

They're from the same plant - the fruit (i.e., coriander seed) and the leaves of the coriander plant (i.e., cilantro leaves) have culinary, as well as medicinal, purposes.

Coriander is the fruit/seed from the pink and mauve flowers of a delicate plant that resembles parsley (which is one of many other plants within the same Apiaceae family). They're yellowish brown and have a mild, fragrant aroma and aromatic taste similar to a combination of lemon peel and sage (Encyclopedia Britannica, n.d.).  Note, chefs often describe coriander as tasting fruity and a little nutty.

“When ripe coriander seeds are deliciously sweet , with a nutty taste of sage and orange.  When unripe, they have an unpleasant bug-like smell - perhaps the reason the Greeks called it koris, meaning bedbug” (Aggarwal, 2011, p. 104).

Buying & storage tips:
Aggarwal (2011) recommends buying whole coriander seeds (which will stay fresh for approximately one year) in lieu of ground coriander (which should only be bought in small quantities) or the oil as the “oils dissipate fairly quickly once ground” (p. 105).

For the cilantro herb, I highly recommend purchasing a glass herb keeper...I’ve managed to keep my cilantro fresh for up to a week in my fridge in this container.  Note, this version is available from Crate and Barrel, but I’m sure there are many other retailers carrying this option now too.

Actions and medicinal use:
Orally, coriander is used for gastrointestinal problems, including dyspepsia, nausea, diarrhea, flatulence, constipation, irritable bowel syndrome (IBS), and to stimulate the appetite. Coriander is also used orally for convulsions, insomnia, anxiety, as a bactericide or fungicide, and to stimulate lactation. Coriander is also used to treat diabetes, worms, and joint pain and inflammation (Natural Medicine Database, 2016).

It is worth noting that coriander has also been actively investigated for multiple biological activities including antimicrobial, antioxidant, hypoglycemic, hypolipidemic (Laribi, Kouki, M’Hamdi, Bettaieb, 2015).

Contraindications:  Commission E, which guides physicians and other health professionals in Germany in the medicinal use of natural remedies, declared that coriander is safe and effective for the treatment of digestive complaints, loss of appetite, bloating, flatulence and cramp-like stomach upsets (Aggarwal, 2011, p. 103).  The Natural Standards Database (2016) references moderate interactions with antidiabetic, antihypertensive, CNS depressant, and photosensitizing medications and caution should be taken if/when those medications are part of the picture...i.e., as always review each case individually before making recommendations.

Aggarwal, B. B. (2011).  Healing spices: How to use 50 everyday and exotic spices to boost health and beat disease.  New York, NY: Sterling.